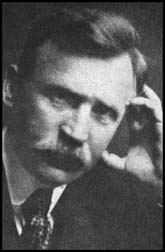 Samuel S. McClure was born at his grandfather's house at the Frosses, near the familiar leaning rows of fir trees. In 1866, the McClure family emigrated to Quebec, Canada where Samuel spent his teenage years working on the family farm.

He was educated at Knox College, Illinois, and then worked for a time at a cycle firm, where he was asked to edit a newly launched cycle magazine called The Wheelman. While working for Century Magazine in New York he quickly he developed a new concept of syndicating fiction, an idea that would make him his fortune. McClure realised that he could sell new pieces of serialised fiction to the newspapers.

McClure set up America’s first newspaper syndicate in 1884 and was very quickly introducing millions of American readers to the early works of Robert Louis Stevenson, Sir Arthur Conan Doyle and Rudyard Kipling. In 1889, McClure bought the first twelve Sherlock Holmes stories for £12 each. He is also credited as discovering Rudyard Kipling when he bought the rights to serialise The Jungle Book.