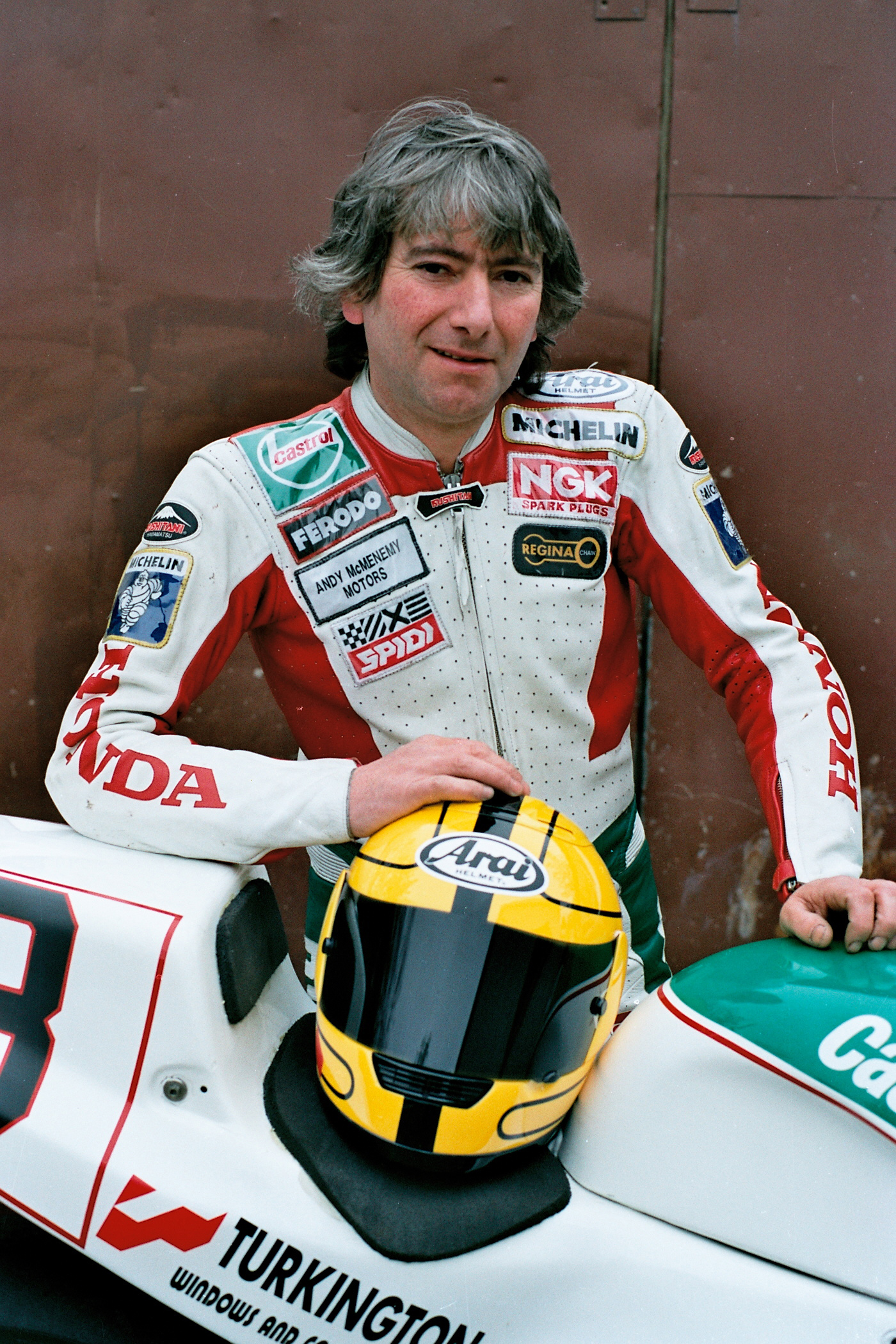 King of the Roads

William Joseph Dunlop was born at Culduff, near Ballymoney, on 25 February 1952.  His career as a motorcycle road racer is unrivalled and earned him an MBE in 1986.  He inspired loyalty from a legion of fans spread over every continent.  Exhaustive humanitarian work set him apart from any sportsman of his day and for this he was awarded an OBE in 1996.  The ‘King of the Roads’ was one of the most remarkable men of his generation.

Joey began racing in 1969 and within a few years had established a reputation as an exciting and talented rider.  With his colleagues in the Armoy Armada he began to win trophies at circuits and road races throughout the British Isles.  When his life was tragically cut short in Estonia in 2000, he had amassed a staggering 26 TT wins at the Isle of Man and 13 at the NW200.  Combined with five World Championships and over 160 other victories, his achievements may never be surpassed.

1952  William Joseph Dunlop was born to parents William and May on 25 February near Ballymoney, Co. Antrim.  He follows sister Helen (three years his elder) and is big brother to Linda, Jim, Virginia, and the young twins Robert and Margaret.

1967  At 15 years old, a young Joey met Mervyn Robinson who introduced him to the wonders of motorcycling.  Mervyn later married Joey's sister, Helen.

1969  Raced for the first time at Maghaberry, riding on a Triumph Tiger Club.

1973 Joey was supported by his first full sponsor, Danny McCook, who bought him a 350cc Ameracchi.  He entered his first NW200, but failed to get far off the starting line after breaking his chain.

1975 Joined Rea Racing Team and gradually began to achieve success in local races.  Won his first road race, the 500cc class at the Temple 100.  Joey, brother Jim, brother-in-law Mervyn Robinson and another local rider Frank Kennedy, became known as the Armoy Armada and were regularly in the top placings at Ulster races.  They often battled with Ray McCullough and his colleagues Trevor Steele, Ian McGregor and Brian Reid, the Dromara Destroyers.

1976  Joey raced for the first time in England, at Oulton Park.  The Armoy Armada became so popular that sponsor John Rea bought a bus to bring fans from the Railway tavern, Ballymoney, to race meetings. Joey competed at the Isle of Man TT, winning a Bronze Replica for best newcomer.

1980  With the death of fellow riders Frank Kennedy, Mervyn Robinson and Tom Herron in the space of twelve months, Joey briefly considered retiring from the sport.  He overcame his doubts and was triumphant at the TT with a famous victory.  Riding a Yamaha, Joey took the flag ahead of the Honda team of Mick Grant and Ron Haslam in the Classic 1000 race.

1981  Debuted for the Honda team at Donington Park. 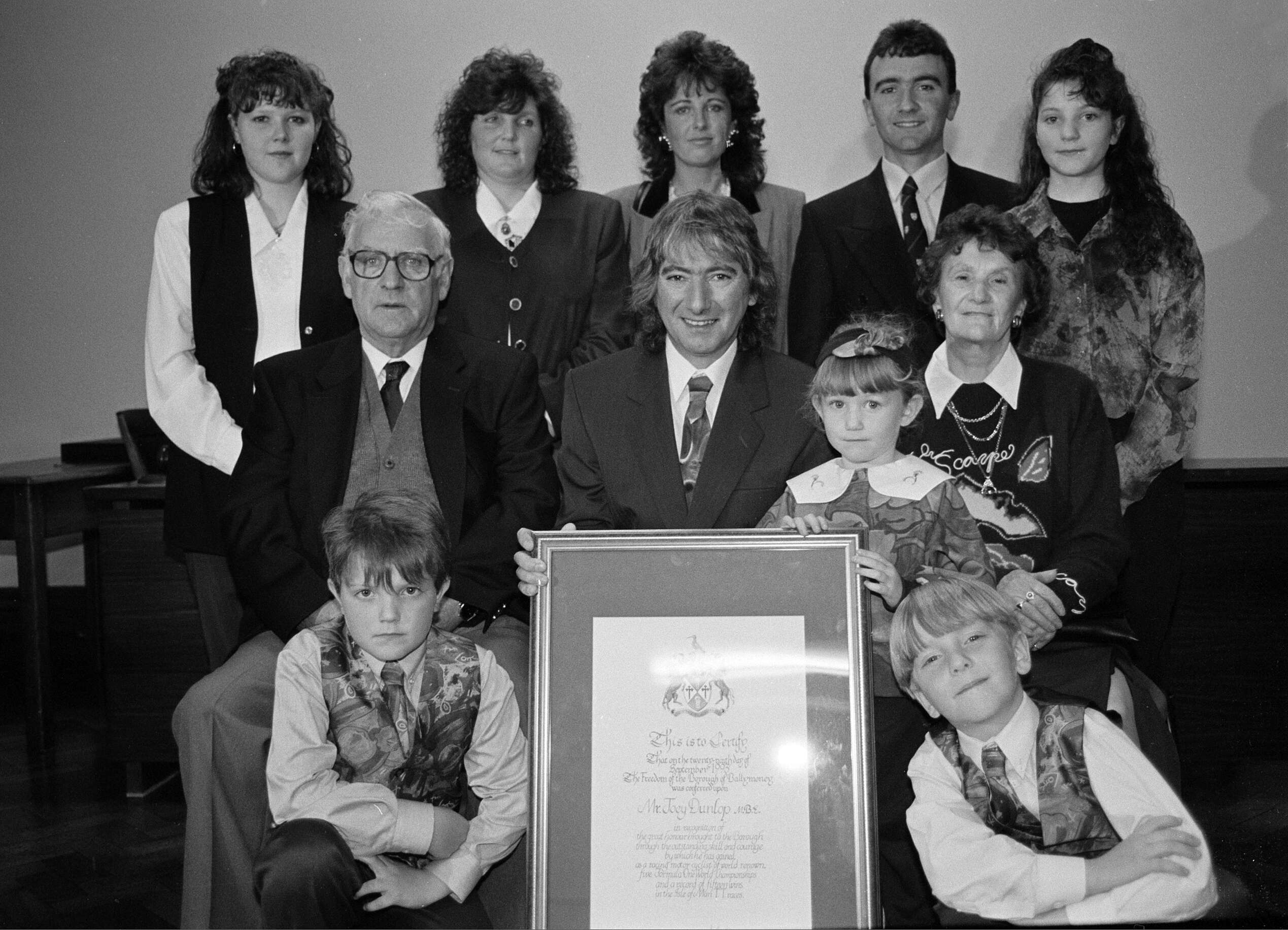 1985  Another astonishing season which included a hat-trick of wins at both the Ulster Grand Prix and the TT, a double victory at the NW200 and Formula One wins in Holland, Portugal, Spain and Germany.  Joey's TT victories were all the more remarkable as he narrowly missed drowning when the fishing boat taking him to the Isle of Man was sunk.

1986  Awarded an MBE for his service to motor sport.

1989 After a collision with another rider at Brands Hatch, Joey's injuries forced him to rest for a year.

1993 At the TT, Joey won his fifteenth race, beating the record previously set by the legendary Mike Hailwood. Ballymoney Borough Council presented him with the Freedom of the Borough.

1996 Joey was honoured with an OBE in recognition of his humanitarian deeds.  He drove alone across Eastern Europe to take aid to Romania, Bosnia and Albania.

2000 Another triple win at the TT brought Joey's tally to 26 and, in recognition of this astonishing feat, he was presented with the Manx Sword of State.

On Sunday, 2 July 2000, Joey Dunlop was killed while racing in Estonia.

The ‘King of the Roads’ was one of the most remarkable men of his generation and his achievements will be remembered forever. 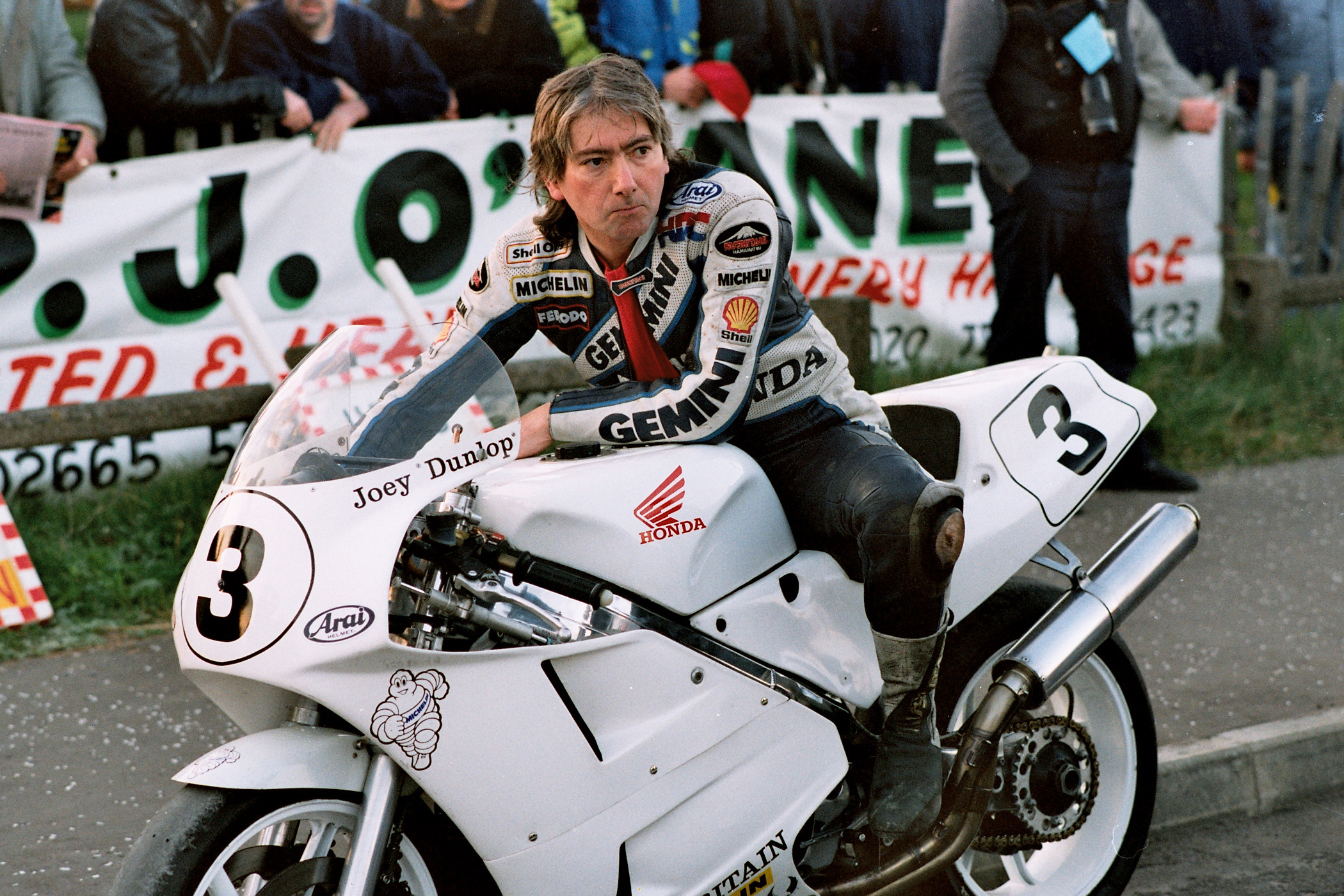