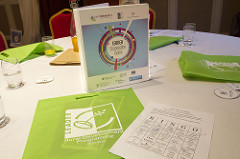 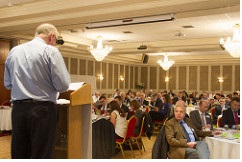 The Rural Network for Northern Ireland and the Ireland National Rural Network hosted a joint conference exploring the theme of LEADER Co-operation within the context of their current Rural Development Programmes.

This 2 day conference took place at the Canal Court Hotel, Newry, Co. Down and included representatives from LAGs in Northern Ireland and Ireland, as well as Managing Authorities and Network Support Units from UK and Ireland. The event was held to encourage representatives of LAGs throughout Ireland to come together and discuss potential co-operation ideas under the Transnational Cooperation (TNC) theme.

Throughout the event we had the opportunity to hear from DAERA and its ROI counterpart, DAHRRGA on the Managing Authority commitment to all-island co-operation and of the work both had done to standardise the operational rules across both regions. In theory, this should make co-operation on a North-South basis much simpler.

A series of speakers contributed on the benefits of co-operation under LEADER and shared their own experiences of successful projects from previous LEADER Programmes.

A marketplace for co-operation was attended by: Waterways Ireland, Loughs Agency, Lough Neagh Partnership & Lagan Navigation Trust and delegates had the opportunity to discuss opportunities for mutual involvement going forward.

A series of workshops were also held where delegates representing LAGs could share co-operation ideas and identify the benefits and obstacles they might encounter. As a result of this, Causeway Coast and Glens LAG had some keen interest in its Rivers project from delegates representing Kilkenny LEADER Partnership, Breffni Integrated Ltd Cavan and Waterways Ireland. There was also discussion of a potential Dunes Erosion project with Ards & North Down and Mid & East Antrim was interested in the Causeway Coast and Glens Islands.

A co-operation Toolkit was made available and includes common guidance, FAQ’s on co-operation and a comprehensive contact directory for all LAGs in Ireland.

Overall, the general consensus was that LAG’s shouldn’t restrict themselves to covering specific themes as there are so many interesting ideas floating about and the immediate priority should be for LAG sub-group members to visit as many other LAG areas as possible both home and across Europe to develop relationships and share ideas.