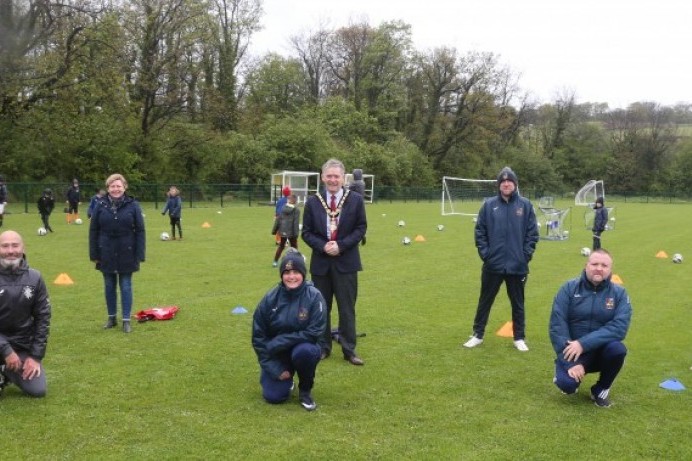 The Mayor of Causeway Coast and Glens Borough Council opened this month’s full Council meeting with a special message to mark Volunteers’ Week.

Alderman Mark Fielding said he wanted to recognise all those people who have made a difference over the past year by giving their time, skills and practical support.

“Volunteers are active at the heart of every community and the pandemic has helped us all to see the crucial role they play. On behalf of the entire Borough, I offer my gratitude to all those individuals and groups who selflessly do so much for the benefit of others,” he said.

The Mayor also offered his congratulations to Royal Portrush Golf Club on its receipt of the Freedom of the Borough and described the event, which took place at Cloonavin on May 21st, as a highlight of his term.

“I’m pleased that we were able to formally recognise the Club’s role as hosts of the hugely successful Open in 2019,” he added.

Alderman Fielding finished by offering his thanks to all those on Rathlin who welcomed him to island earlier in the day, marking his first visit as Mayor to this unique part of the Borough.

During the meeting, members ratified the following decisions:

Extend Household Recycling Centre opening hours to 8pm every Wednesday during June, with a review on June 29th.

Accept funding assistance of £177,460.52 from the European Maritime Fisheries Fund to carry out a series of improvements to Council harbours for commercial fishing interests, with a contribution from Council of £26,755.17.

The works identified include:

Consider the engagement of a private contractor to complement Council’s litter enforcement by seeking an expression of interest to engage in a 12-month pilot targeting dog fouling, litter and fly tipping. Members also agreed to remove the early repayment discount rate for littering fixed penalties during the pilot.

Award the contract for the provision of dog kennelling facilities and related services to BARK (Benvarden Animal Rescue Kennels).

Support Notice of Motion proposed by Alderman Sharon McKillop, seconded by Alderman Mark Fielding, to recognise Bobby Greer and his extraordinary contribution to the Bushmills community by naming the Dundarave Sports Facility as the Bobby Greer Sports Complex and that floodlights are installed at the pitch and multi-use games area.

Carry out necessary structural health and safety works at Ballycastle Museum at an estimated cost of £27,340+VAT.

Accept a funding offer from DAERA and deliver the third Rural Business Development Scheme from July 2021, with a budget in the region of £125,000.

Establish a network of Town Forums initially in Ballycastle, Ballymoney, Coleraine and Limavady, with potential to extend in Portstewart and Portrush, and then to the six other towns/villages in the Borough. These informal groups will act in an advisory role for the delivery of Council’s Town and Place Management function.

Support a Notice of Motion proposed by Councillor Callan, seconded by Councillor Holmes, that Council falls in line with new guidance published by the Department for Digital, Culture, Media and Sport to have the Union flag flown on Council and Civic building 365 days.

Approve the use of the car park between Riada Stadium and the hockey pitches at Joey Dunlop Leisure Centre for use as a local Covid testing centre.

Support a Notice of Motion proposed by Councillor Margaret-Anne McKillop, seconded by Councillor Schenning, for a suitable memorial to Mark Ashton within the Council area.

For further details about the meeting go www.causewaycoastandglens.gov.uk/council/minutes/1st-june-2021-council-meeting

As per normal Council procedures, all decisions are subject to the ‘call-in’ process.

You can keep up to the date with the very latest news and announcements from Causeway Coast and Glens Borough Council by following us on Facebook and Twitter.