A memorial plaque is now in place on the footpath at Railway Road in Coleraine, marking the spot where a car bomb went off in 1973.

Six people lost their lives in the explosion, with many more left injured and bereaved.

The plaque, which was kindly donated by Ivan Murdock and Sons, is the first stage in a wider commemoration project, which will include a new sculpture near the Town Hall and an oral history initiative.

The anniversary of the bomb takes place on June 12th, and the incoming Mayor of Causeway Coast and Glens Borough Council will hold a public event on the day to mark the installation of the commemorative stone.

The overall project is due to be ready in line with the 50th anniversary of the bomb next year, when a formal launch will also take place.

Today (Wednesday 1st June 2022), the Mayor of Causeway Coast and Glens Borough Council, Councillor Richard Holmes, met with some of those who have been involved in the process to date, including victims’ family members and those directly impacted by the bomb.

They were afforded a moment of quiet reflection at the site on Railway Road before the stone went on public display.

Speaking afterwards, the Mayor said: “Extensive engagement and consultation has taken place as we sought to place a permanent memorial in the town to remember the terrible events which unfolded on June 12th 1973.

“The family members of victims, and those directly impacted, have always been at the heart of this process and it was wholly appropriate that they were given this opportunity to view the memorial stone in place before anyone else.

“It provided them with an important opportunity to come together, with the dignity and respect they deserve, and I was very pleased to facilitate this.

“I would like to extend my sincere gratitude to everyone who championed this project, particularly the bereaved families and those directly affected by the bomb, as well as Ivan Murdock and Sons, for their input and support.

“The memorial plans were first initiated in 2018, and I am very pleased to see them progress to allow for a formal dedication of the complete project coinciding with the 50th anniversary of the bombing in 2023.” 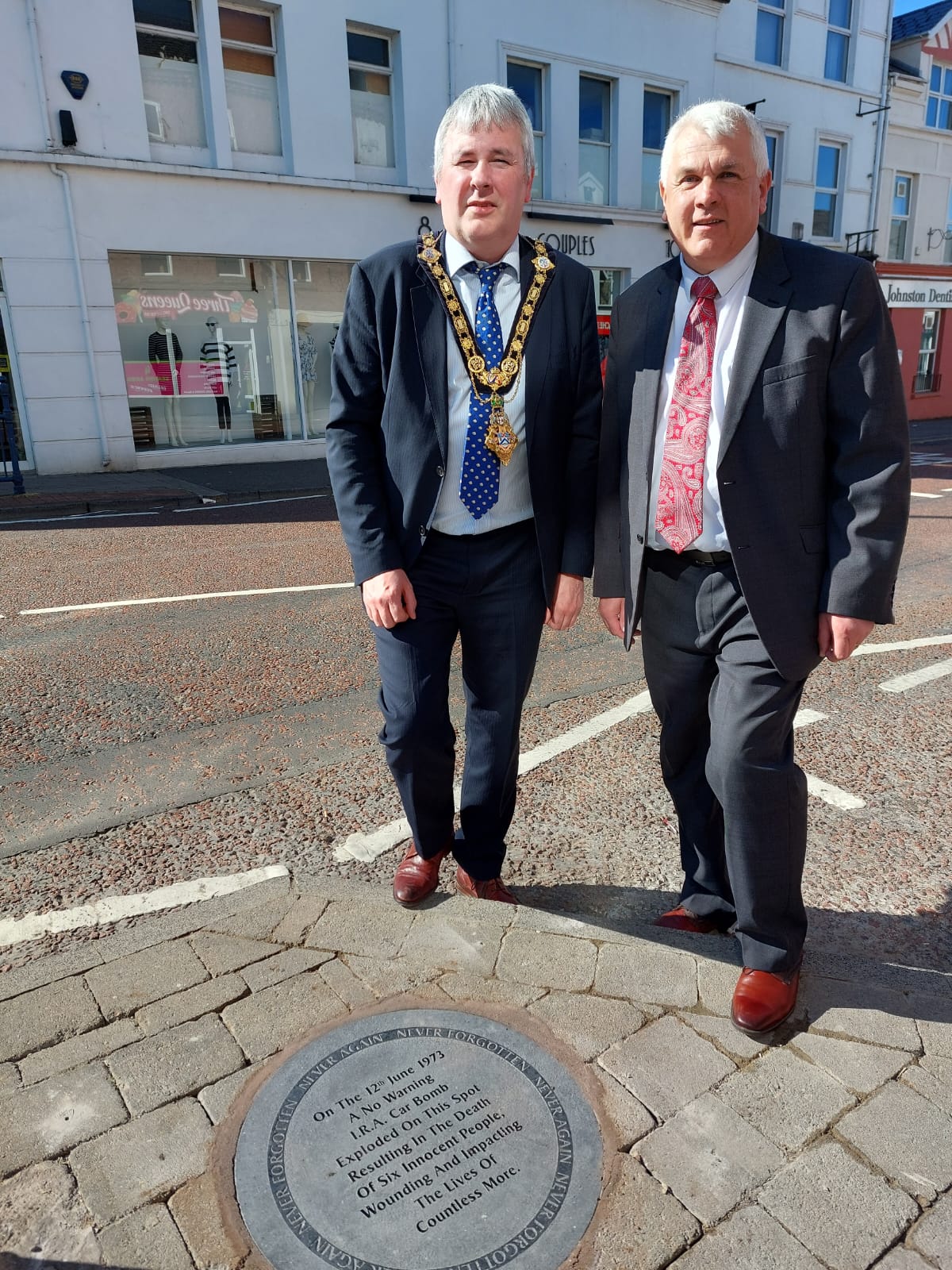 The Mayor of Causeway Coast and Glens Borough Council Councillor Richard Holmes pictured at the site of the memorial stone on Railway Road in Coleraine, along with Councillor Alan McLean who first proposed the motion.