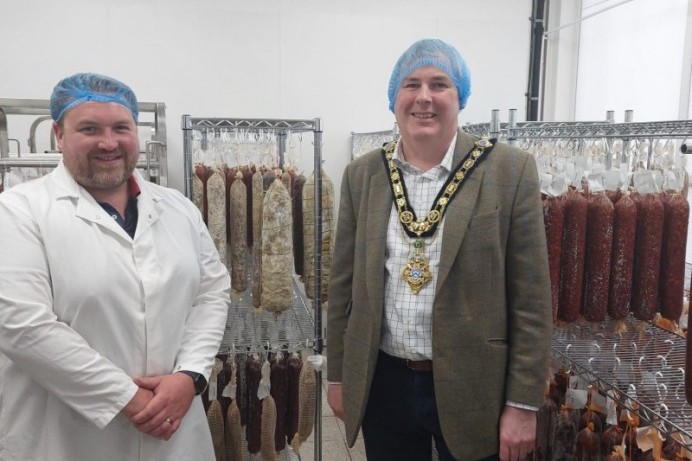 The Mayor of Causeway Coast and Glens Borough Council has visited Corndale Farm outside Limavady to learn more about its ongoing development.

Since the business was established, it has gone on to become Northern Ireland’s leading charcuterie offering a host of award-winning products.

It was also one of the first recipients of Council’s Enterprise Fund, which was set up in 2018 to provide practical support to the next generation of entrepreneurs in the Borough.

“I was very pleased to first propose the Enterprise Fund which represented a new investment by Council at the time. It’s encouraging to see businesses continuing to thrive after benefiting from the fund and to know that Council has played a positive role in their journey.

“Just last week I was delighted to learn about Corndale’s success in the Scottish Retail Food and Drink Awards, winning three awards for their products including the UK Producer Platinum Award, which is a fantastic achievement for a local producer from this area.

“Our Borough’s thriving local produce sector is one of our greatest assets, and we’re fortunate to have innovative, forward thinking businesses like this contributing to both our Borough’s reputation for food excellence and the local economy as well.”

"Since the Mayor last visited us in 2018, we have shown great growth and expanded our production capacity, and I was glad to have this opportunity to show him around our new production facility.

“It was great to tell him all about how we have grown as a company and the new markets to which we now sell into. I would like to personally thank the Mayor and Causeway Coast and Glens Borough Council for all their support throughout the years."