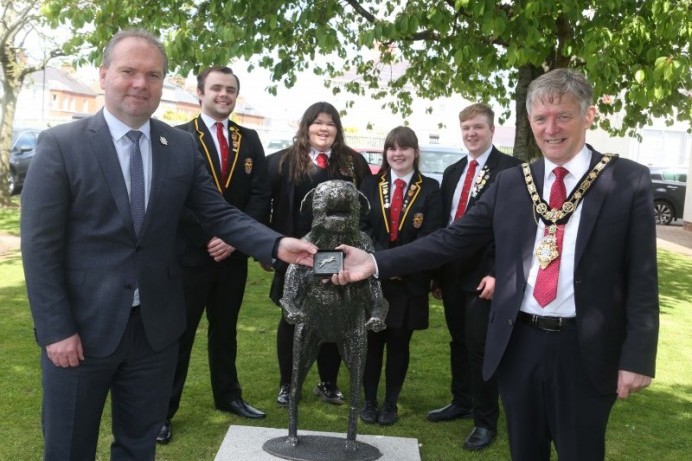 The Mayor of Causeway Coast and Glens Borough Council has visited Limavady High School as part of its 60th anniversary celebrations.

Speaking afterwards, he said: “I want to thank Mr Mornin, his staff and pupils for inviting me to be a part of this special occasion.

“For the past six decades Limavady High School has played an important part in the lives of so many young people in the town and surrounding areas. Everyone associated with the school should be proud of what has been achieved in that time.

“The past year has probably been one of the most challenging in its history and it was fantastic to see teachers and pupils back in the classroom continuing their learning together.

“I also had an opportunity to see the school’s new statue of a wolfhound, which is synonymous with the Limavady area and a feature within Council’s Coat of Arms.

“It is a fitting legacy to the anniversary, and I offer my warmest congratulations to the entire school community as it prepares for the next chapter in its history.”

For those with connections to the school, you won’t want to miss a new exhibition which is now open in the Ritter Gallery at Roe Valley Arts and Cultural Centre.