Causeway Coast and Glens Borough Council has approved its annual Statement of Accounts for the year ended 31st March 2021 at a Special Council Meeting held on Monday 20th September 2021.

For ratepayers, the most notable figures are:

1. Since last year, loans carried forward by the Council in its accounts have reduced by £5.4 million.  This compares favourably to the other 10 Councils whose loans in the previous year have increased by an average of approximately £5.2m.

2. The general fund balance has increased by £761,000 giving a carrying total of £4.531m, which is above recommended levels.

3. Other useable reserves have increased by £6.577m to a total of £12.094m. The major contribution to this increase was the creation of a COVID Recovery Reserve. This aims to mitigate any future losses which arise because of the ongoing pandemic from impacting upon the rate payer.  The Council drew down the second lowest level of central government funding from the Department of Communities.

Commenting on the Statement of Accounts, the Mayor of Causeway Coast and Glens Borough Council, Councillor Richard Holmes said: “This is an excellent result for Council against the backdrop of unprecedented social and economic uncertainty created by the pandemic. For another consecutive year we have received a sound and clean audit opinion from the Northern Ireland Audit Office (NIAO)* which reinforces the benefits of financial controls implemented across the organisation.

“It should be noted that this has occurred during a period where Causeway Coast and Glens Borough Council has delivered one of the lowest cumulative rates increases in Northern Ireland, all the while reducing loans by £5.4million.  We owe a debt of gratitude to our staff and leadership team who have delivered a sound financial performance in challenging circumstances.  The Finance Committee have noted this turnaround in Council’s fortunes.”

“Our ratepayers should be reassured by our current financial position which demonstrates that we are committed to building an efficient organization which delivers effective services across the Borough.”

1. *The Northern Ireland Audit Office (NIAO) has recommended an “unqualified audit opinion”. This means that Council has successfully gained this recommendation since its inception.

3. The table below shows the rates increases in all Northern Ireland’s 11 Councils over the last six years. 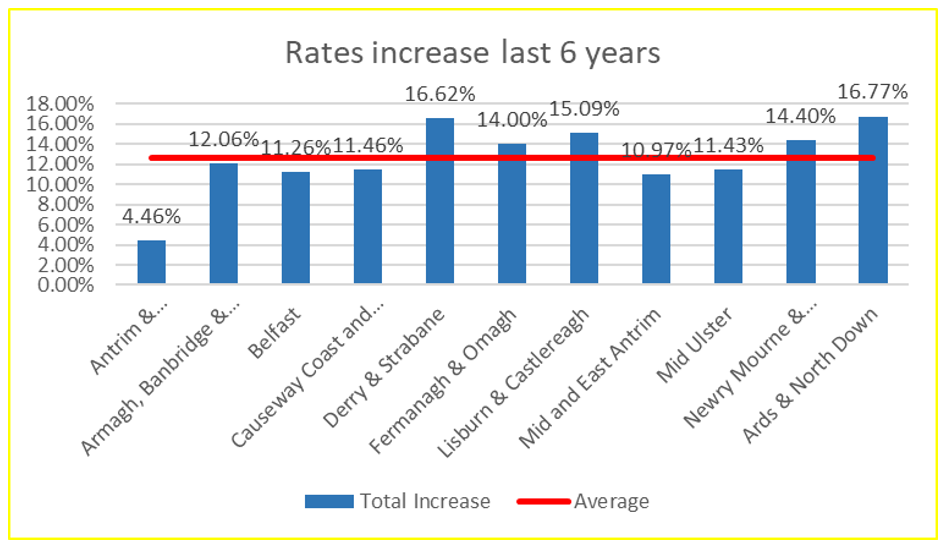