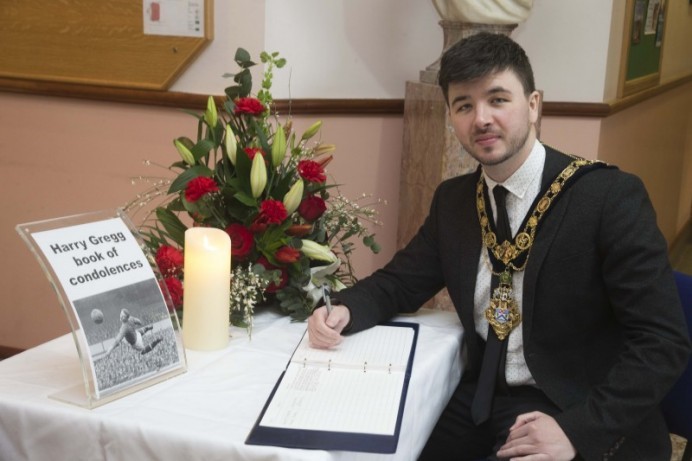 The Mayor of Causeway Coast and Glens Borough Council has opened a Book of Condolences in Coleraine Town Hall in memory of football legend Harry Gregg OBE.

A former goal keeper for Manchester United and Northern Ireland, Mr Gregg was part of the famous ‘Busby Babes’ squad who played under Sir Matt Busby. He passed away in Causeway Hospital aged 87 on Sunday 16th February.

Offering his sympathies, the Mayor Councillor Sean Bateson said: “Harry Gregg will be remembered as one of the Borough’s most renowned sporting sons. He was respected and admired around the world for his performances on the pitch along with the role he played in the aftermath of the Munich air disaster in 1958. It is clear that Harry was held in high regard by so many and I hope that this brings some comfort and consolation to the Gregg family at this very sad time.”

Members of the public who wish to pay their own tribute can sign the Book of Condolence at Coleraine Town Hall from now until Monday 2nd March. The Town Hall will be open every Monday – Saturday from 9am to 5pm.

Mr Gregg’s funeral is due to take place in Coleraine at 11am on Friday 21st February.