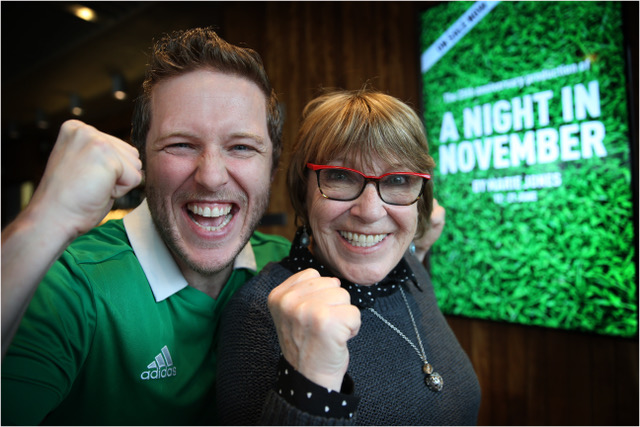 Award-winning play A Night in November coming to Limavady

Soda Bread Theatre Company bring the award winning play, A Night in November, written by the much lauded playwright Marie Jones to Roe Valley Arts and Cultural Centre in Limavady on Wednesday 4th September at 8pm.

The writer of other hit shows including Women On The Verge Of HRT, Stones In His Pockets, Dancing Shoes; The Story Of George Best, Fly Me To The Moon and Christmas Eve Can Kill You, Jones is celebrating 25 years since the first show took the West End by storm. To tie in with this history, lead actor Matthew Forsythe was actually at the football match the play is inspired by and Marie Jones’ son Matthew McIhinney takes the reins as director for this production.

A Night In November tells the story of Kenneth MacCallister, a clerk in the local welfare office, who has always followed the rules. He loved who he was supposed to love. He lived where he was expected to live. He fought who he was taught to fight. That is, until one night, A Night In November, when he did the most exciting, outrageous, crazy, mad thing he'd ever done!

Full of pathos, humour, questioning and identity, this play is more relevant and thought provoking than ever.

The performance takes place on Wednesday 4th September at 8pm.