Home > News > ATLANTIC SESSIONS IS BACK! 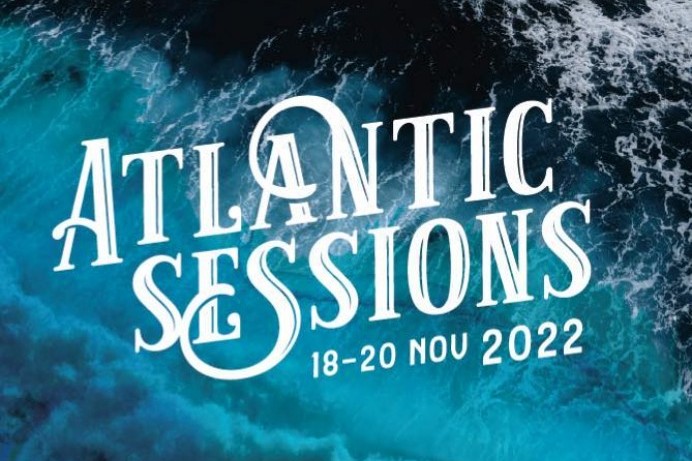 ATLANTIC SESSIONS IS BACK!

The award-winning Atlantic Sessions music festival is coming back to Portstewart and Portrush next month.

The much-loved event takes place from Friday 18th November to Sunday 20th November 2022 with a packed programme of over 30 live gigs taking place in both seaside towns.

Music fans can look forward to two days of unmissable performances in a wide variety of venues with new additions to the music trail including the newly refurbished Portrush Playhouse, The Station and Elephant Rock.

The Mayor of Causeway Coast and Glens Borough Council, Councillor Ivor Wallace, commented: “We held our last ‘in-person’ Atlantic Sessions in 2019 which was our most successful to date.

“During Covid, our focus moved online and the virtual event was promoted internationally as part of Tourism Ireland’s ‘Fill Your Heart with Ireland’ campaign.

“With over 5m social media followers this was a unique opportunity to showcase not only the finest talent from the music scene, but our stunning destination as well.

“This year, like many music fans, I am delighted to see it return in its original format, helping us extend the season beyond the normal holiday periods and attracting increased footfall.

“We are grateful for the support of our venue proprietors, and visitors can look forward to the warmest of welcomes in Portrush and Portstewart once again. As we have seen in previous years, the fantastic variety of free musical entertainment, in two of our most beautiful coastal locations, is a winning combination for everyone.

“We are very proud of Atlantic Session’s ongoing reputation as a place to celebrate emerging talent as well as established artists, and we are looking forward to another very successful weekend on the Causeway Coast.”

Programmed by Snow Water on behalf of Causeway Coast and Glens Borough Council, this year’s festival will feature some Atlantic Sessions favourites who have previously performed sell-out performances. The acclaimed PORTS, The Bonnevilles, No Oil Paintings and singer-songwriters including Ciaran Lavery, Matt McGinn and ROE, will all be performing their 2022 albums and premiering new releases, some of these featuring at the popular ‘Sunday Session’ with Ralph McLean.

A host of artists, brand new to the festival, will make their debut performances at the free music trail, including wonderful local talent such as Kate Nicholson, Many a Son and Lee Rogers. Also look out for five of the 2022 Music Prize nominated artists plus new single, EP and album launches!

Tickets are now on sale for our three headline events plus a limited number of festival passes are available at www.atlanticsessions.com. All other gigs on the Music Trail are admission free and no booking is required.

Alongside the not-to-be-missed free gigs, Causeway Coast and Glens Borough Council is working with hospitality partners and Taste Causeway to ensure visitors can access a range of special accommodation and foodie offers to enhance their stay. Keep an eye on the event’s online channels for the latest updates.

This event is part of a Giant Taste of the Causeway Coast & Glens sponsored by Tourism NI.

PORTS toured extensively after the release of their album ‘The Devil is a Songbird’ garnering support from BBC radio 1, BBC Radio 2, BBC Radio 6, BBC Radio Foyle and RTE with performances on Cerys Matthews show (Radio 6) and Other Voices (RTE). This earned them a strong following. They have 3million+ Spotify plays, and 45k monthly listeners. They return with a deeper mature sound, lyrically strengthened and re-establishing themselves as one of the more interesting, exciting acts in the country.

CEITHRE CINN - a unique performance celebrating wonderful artists collectively & individually. CIARAN LAVERY is an NI Music Prize winner for Best Album. SUZANNE SAVAGE is a virtuosic vocalist, songwriter and first call for Paul Brady, the RTE Concert Orchestra and many more. FINNIAN is one of Ireland’s fastest rising musical stars. MATT McGINN is an award winning and prolific songwriter from the Mourne Mountains. Together they are CEITHRE CINN. Their first collective release was called 'TRUE LOVE’. Written by all four members of CEITHRE CINN, it was recorded live moments later.  The song became one of the most played songs on BBC Radio Ulster & RTE Radio 1 that year, having been playlisted on both.

ROE’s 2020 EP ‘Things We Don’t Talk About’ saw ROE cross 1 million streams on Spotify and was the culmination of 4 years of relentless writing, releasing and touring as a completely independent artist. At 18-years-old she received a coveted slot on the BBC Introducing Stage at Glastonbury in 2017, which led her on to perform across Europe, North America, India and beyond; supporting local legends Snow Patrol on their 2018/19 UK Arena Tour. The winner of Best Emerging Artist-Northern Ireland Music Prize, 2018 and recipient of the PRS Foundation Momentum Fund, 2020, ROE’s music has been used as part of a TV and radio campaign for BBC Music NI, in ITV’s ‘The Only Way is Essex’, Channel 4’s ‘Made in Chelsea’ and Netflix’s ‘Terrace House’.

ANDREW MCGIBBON
As one-half of acclaimed Northern Irish garage blues duo The Bonnevilles, Andrew McGibbon has spent the last few years underscoring his status as one of the island’s most captivating frontmen. His Northern Gothic is a wonderfully idiosyncratic debut solo release that reveals the full breadth of his songwriting voice.