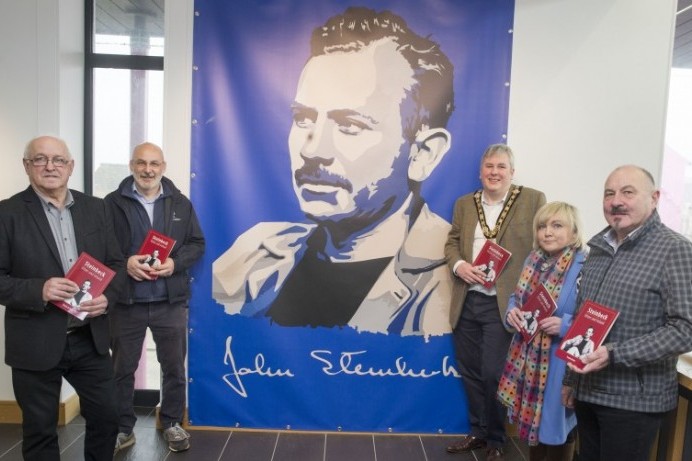 The free exhibition. which runs until March 12th, was officially opened with a presentation to the winner by the Mayor of Causeway Coast and Glens Borough Council, Councillor Richard Holmes.

A virtual exhibition tour will take place on Tuesday 15th February at 1pm via Facebook live on the Arts Centre’s page with Festival board member, Harry Coates and organiser, Douglas Bartlett.

The photography competition was first launched in 2021 under the themes of The Homeplace, The Human Animal, On the Road and Helping Hands.

Many of the submissions reflected on picturesque local landscapes, with others seeking to convey a whole story in one thoughtful picture or through humour. Impressed by the levels of imagination and artistic inspiration, the judges faced a difficult task in deciding the winners.

The 20 entries selected for exhibition all successfully encapsulated something of the essence of Steinbeck’s legacy. Like his novels, they explore the interplay between geography and humanity and demand the viewer pause and appreciate a view or an image where details or activity are worthy of closer inspection.

From these, one overall winner was chosen and three other photographs were selected for special commendation. These four submissions were equally divided between the categories of landscape and human life

This dramatic photograph taken at the Barmouth of the River Bann shows the angry waves of the North Atlantic breaking over the western wall that channels the river on its final course into the sea.

The wall itself resembles a road, fraught with dangers, extending out into the ocean. The ominous clouds in the slate grey sky, the obvious energy of the waves, the jagged rocks protruding from the foaming sea and the puddled concrete of the wall with its rusting markers combine to suggest an epic confrontation.

The juxtaposition of the solid manmade features and the dangerous phenomena of the natural world convey a timeless story of man battling nature. This could evoke the perilous journey taken by the impoverished migrant labourers in Steinbeck’s Grapes of Wrath, heading for the Pacific edge in California.

Living on the Road by John Phillip Hutton

This beautifully composed photograph shows an authentically clothed and equipped itinerant cooking food over a campfire. None of the items photographed betray any sense of the modern world. The fire is fuelled by wood and the cast iron kettle, suspended from the cooking tripod, suggest a time contemporaneous with Steinbeck’s 1940’s USA. The sharpness of focus and the high degree of contrast in this black and white photograph indicate a high level of technical expertise. It hits the brief for “On the Road” exactly as anticipated.

The Homeplace/Helping Hands by Jimmy Cooke

This photograph is really like a companion piece to the first commended work just described. The technical excellence in its production is similarly self evident. It shows an aged gentleman, “hopped up” from the cold, intently splitting firewood for kindling. The suggested inclemency of the weather conditions and the necessarily manual nature of his activity suggest the timeless situation where man battles the elements. The overall demeanour of the gentleman and his facial expression somehow convey a stoic resignation appropriate to the human condition.

This beautifully artistic photograph looking into the sun setting beyond Lough Foyle and the Donegal hills is simply breath-taking. It shows our local landscape in all its majesty. The abstract cloud pattern reflected on the wet sand conjures up landscapes of Ireland captured by the painter Paul Henry. It’s an example of an intertidal zone featured as part of our Festival’s collaboration with the Northern Ireland Science Festival and Ulster University’s School of Environmental Science. It references Steinbeck’s fascination with marine ecology.

Visitors are welcome to view the exhibition during Roe Valley Arts and Cultural Centre’s opening hours: 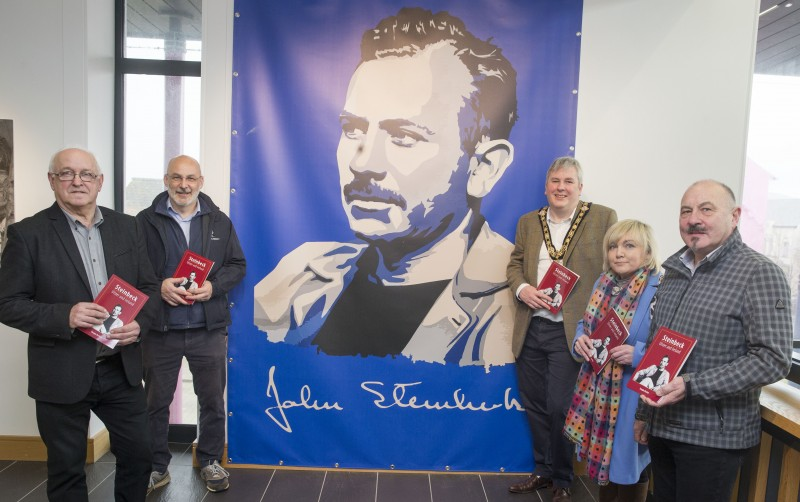 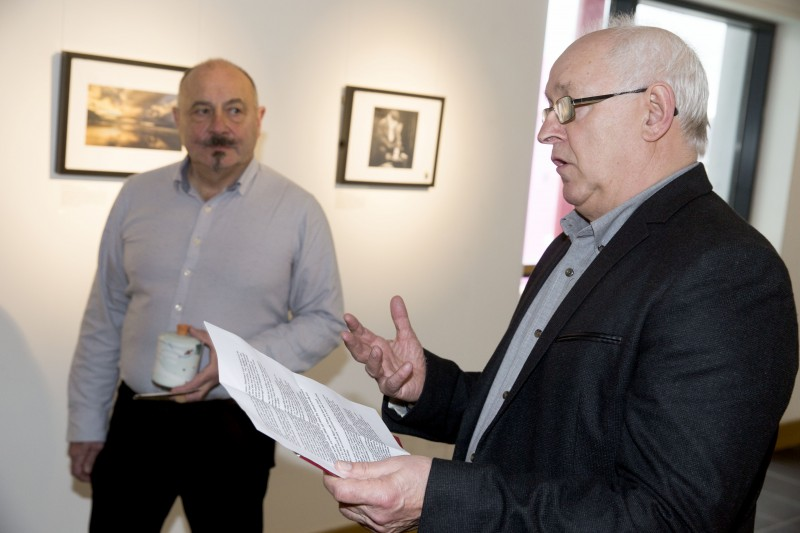 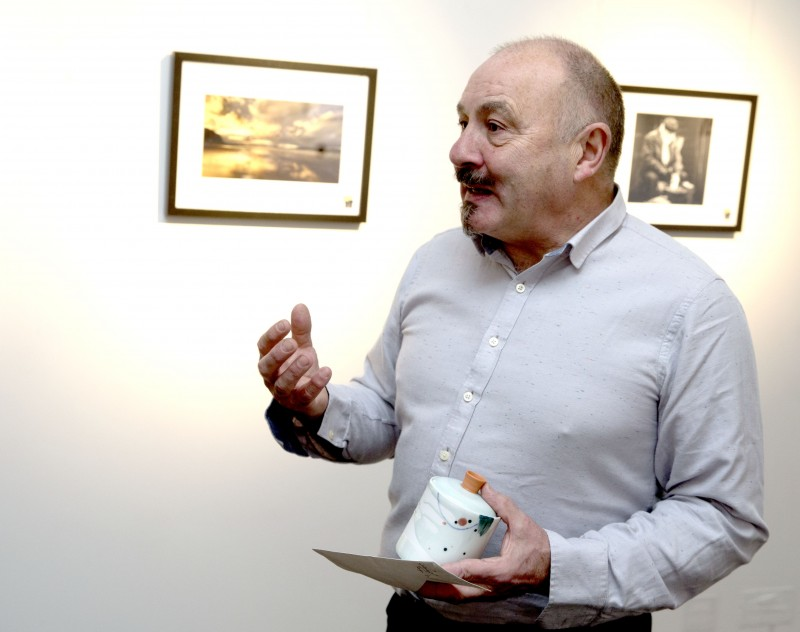 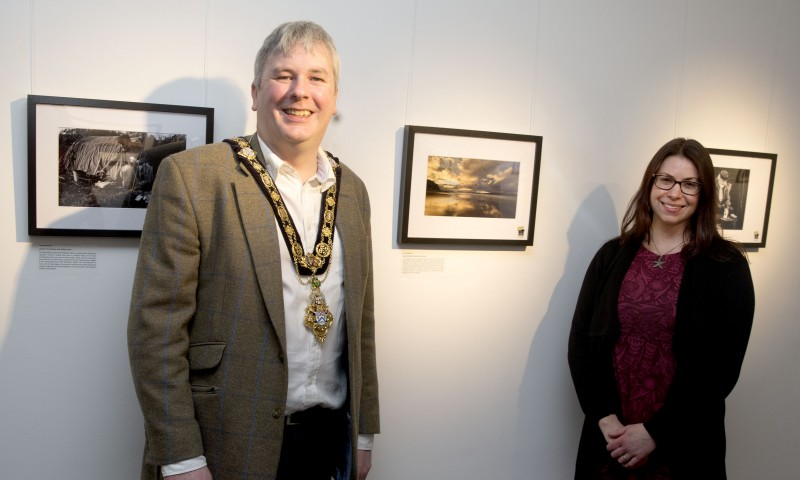 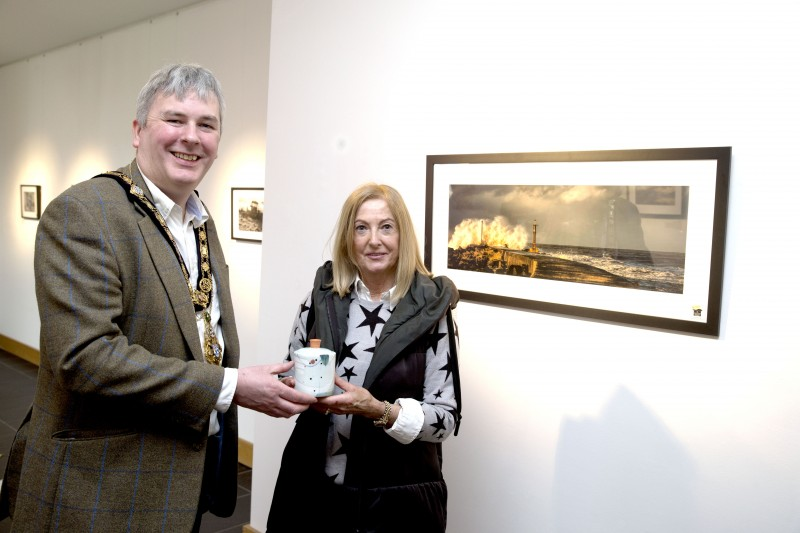