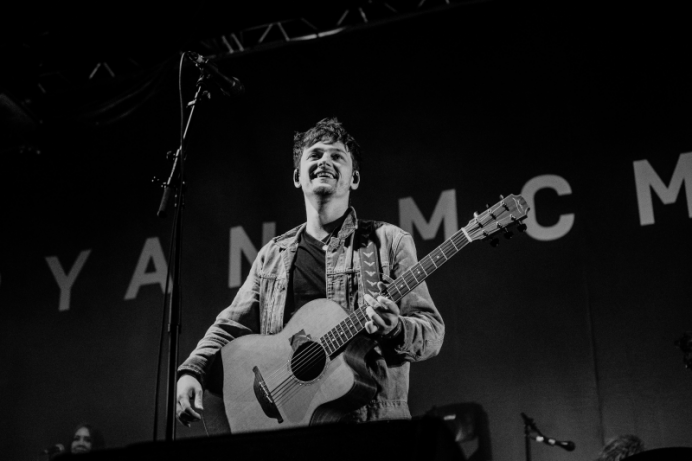 Causeway Coast and Glens Borough Council is delighted to confirm that Ryan McMullan will headline this year’s Atlantic Sessions.

Fresh from a global tour with Snow Patrol, Ryan’s appearance at the Kelly’s Complex on Saturday 16th November is an exciting coup for the festival which has been attracting music lovers to the Causeway Coast for over 10 years.

Taking place from November 14th – 17th, visitors can look forward to music from the best of home-grown talent and NI Music Prize nominees in venues across Portrush and Portstewart.

Welcoming this year’s line-up, the Mayor of Causeway Coast and Glens Borough Council Councillor Sean Bateson said: “Ryan McMullan is a huge talent who has played to audiences around the world and we’re honoured that he’ll be at the forefront of Atlantic Sessions 2019. To have an artist of his calibre on the bill is a well-earned endorsement for the festival which has cemented itself as being at the pinnacle of the local music scene. We’re looking forward to welcoming thousands of music fans to Portrush and Portstewart for four very exciting days and nights in November.”

Snow Patrol lead singer Gary Lightbody has cited Ryan as one of Northern Ireland’s most exciting artists with the voice of an angel, and he is an avid supporter of the upcoming event: “Atlantic Sessions is an award-winning four day festival in Portrush and Portstewart with over 50 Northern Irish bands on the bill.  A festival with an incredible reputation for its passionate support of local talent.”

With these sentiments in mind, the event will feature a number of unmissable ticketed events, complemented by lots of free gigs which will transform the seaside resorts with an electric mix of sounds.

A very special opening event on Thursday 14th November will celebrate Coleraine man Sam Henry and his remarkable collection of over 800 songs gathered from across the Causeway Coast and beyond. A screening of the new documentary ‘Sam Henry - Songs of the People’ will be followed by a question & answer session and live performances of some of the songs which he has helped to preserve. Directed by acclaimed musician Meabh O'Hare, folklorists, archivists and contemporary music collectors examine how Sam’s pioneering approach placed him at the heart of rural communities and inspired his greatest work.

Also on Thursday, The Muscle Shoals Sessions Album Launch Party with Amanda St John and Tony Villiers will celebrate the acclaimed Alabama venue made famous by the likes of Aretha Franklin, Rolling Stones, Elton John, Boz Scaggs, Willie Nelson, Paul Simon and Bob Dylan. Amanda became the first independent Irish artist to record in the legendary Muscle Shoals and her songs and performance style have been heavily influenced by these artists.

On Friday (November 15th), three of NI’s greatest pop rock bands and NI Music Prize nominees Cherym, Beauty Sleep and Gemma Bradley, come together for a very colourful party while ‘When The Mountains Meet The Sea’ is a super group exclusive featuring Matt McGinn, Wilfie Gilbert, John McCullough, Nicky Scott, Matt Weir and Matt Curran, curated especially for Atlantic Sessions. This outstanding blend of soulful passion and melody will haunt and inspire. For punk music fans, there’s a showcase performance with Problem Patterns and New Pagans, and a DJ set from the Godfather of Punk himself, Terri Hooley.

Saturday’s highlights (November 16th) include the stunning Darkling Air who will be joined by their long time collaborators Arco String Quartet. The band are back with their latest LP 'Ancestor' and during Atlantic Sessions 2019, attendees can expect a night of filmic folk-noir coupled with poetic lyrics, piano, guitar and strings producing a richly emotive and melancholic sound.

BBC presenter Ralph McLean will host a lunchtime ‘In the Round’ with the extraordinary Gareth Dunlop on Sunday (November 17th). With a poetic vulnerability and soulful voice, Gareth’s music has been featured in a wide array of television shows including Bones, House, Lucifer, Switched at Birth, One Tree Hill, and Nashville.  Over the years Gareth has toured in the UK, Europe and US opening for a diverse group of artists including Van Morrison, The Stereophonics, James Morrison and more.

For something a little different, the Portrush shoreline will provide the backdrop for a performance by M Cambridge. Featuring songs from the acclaimed ‘Sea Song’ album, audiences can look forward to hearing sea songs based on old shanties, Ulster weaver-poet poems, traditional ballads and original compositions. As one of the most beautiful and remarkable albums released this year, this is set to be a gig to remember.

Atlantic Sessions will culminate with a showcase party curated by Bird and Bramble, who are dedicated to the promotion of music and creativity in NI.

Director of Snow Water and Atlantic Sessions programmer, Carolyn Mathers, commented: “Northern Ireland is extraordinary in the richness of its talent and our artists are receiving international awards and acclaim. We look forward to hosting premieres of single, EP and albums, new collaborations that have been curated for the festival, NI Music Prize nominees, all with the backdrop of incredible coastal scenery.”

Buy your Festival Pass now at atlanticsessions.com or go online from 9am on Friday 20th September for tickets to individual headline events. For the very latest announcements follow @atlanticsess on Facebook and Twitter