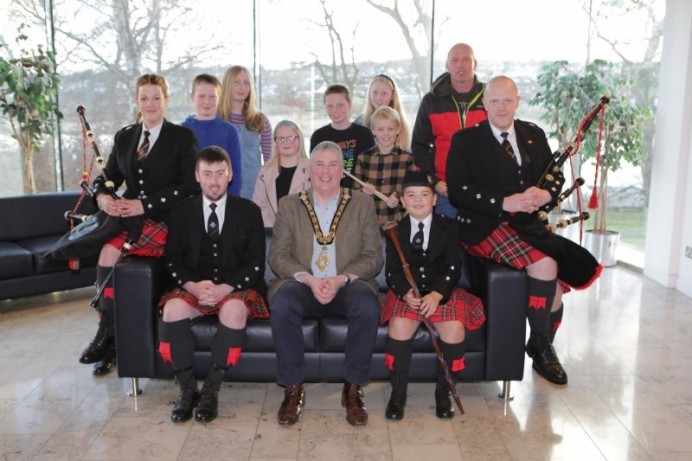 The Mayor of Causeway Coast and Glens Borough Council has hosted a special reception for members of Grove Pipe Band.

The accomplished band, based between Kilrea and Garvagh, is often seen performing at events in the area. Its members also form part of the mass pipe band gathering during the Cancer Research UK fundraising parade held in Garvagh every year.

Councillor Richard Holmes said he was honoured to host the band at Cloonavin, adding:

“I grew up to the sound of the pipe band rehearsing at the hall near my home, and I have fond memories of bringing in the hay whilst listening to them outside during the summer season.

“I was very pleased to welcome some of the members and new recruits to Council’s headquarters recently to express my appreciation for their contribution to the local community and the role they play in maintaining this musical tradition in the area.

“Enthusiastic musicians are central to the band’s success, and I would like to offer my thanks to everyone who has contributed towards this. I wish them many more successful years together.”