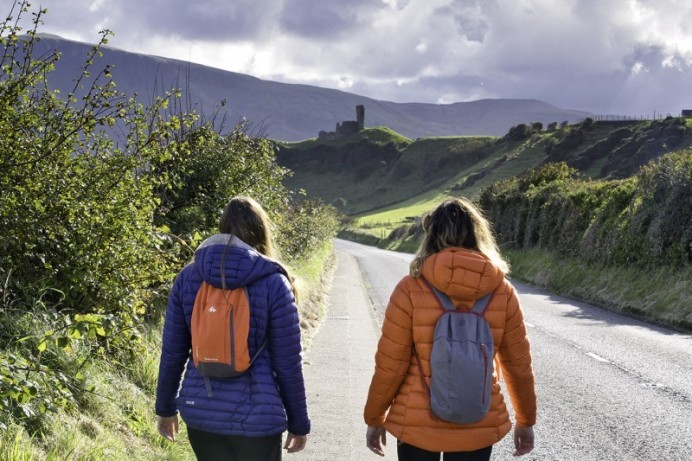 Part of the International Appalachian Trail (IAT) which passes through Causeway Coast and Glens is set to benefit from a cross border cooperation project.

The £141,684 Rural Development Programme scheme will be used to make a series of improvements to a section of the global trail from the Glenshane Pass to Glenariff.

Work started in November and includes replacing signage, way marking and information boards alongside repairs and upgrading of trail infrastructure at locations across the Moyle Way, Causeway Coast Way and North Sperrins Way, covering 114 miles (184km). New sections will also be created to improve access for the public.

Welcoming the project, the Mayor of Causeway Coast and Glens Borough Council, Alderman Mark Fielding, said: “The IAT connects some of the most appreciated and valued landscape in the country from mountains to sandy beaches, rugged coastline to forest.

“The trail improvements will enhance the experience for anyone wishing to explore the great outdoors whether it’s a well-known place or somewhere off the beaten track.

“The trail will also help to reignite local interest in the outdoors and all it has to offer, as well as contributing to the local economy.’

The International Appalachian Trail is one of the largest networks of its kind in the world with route legs in a range of countries including the United States, Canada and throughout Europe.

The Irish section stretches to 302 miles (484km), running from West Donegal to Larne, passing through six Council areas. It starts at the spectacular Slieve League cliffs, goes through Glencolmcille and traverses the Bluestack Mountains in County Donegal before crossing into County Tyrone where it picks up the Ulster Way, taking in the Sperrins before moving on to the stunning Binevenagh, Causeway Coast and the Glens of Antrim.

“With shared geological and cultural storylines, combined with uniquely Irish attractions, the developed Ulster Ireland section has great potential to attract a wide variety of North American walkers, from eco, geo and adventure tourists to fans of the well-known Game of Thrones television series.”

As well as improvements within Causeway Coast and Glens, five other councils will carry out similar projects on their own sections as part of works costing over £600,000 in total. This widespread investment is the result of a collaborative effort by each council area, working together to ensure the overall visitor experience is improved across the entire trail for both locals and tourists. The improvements will have the potential to attract more domestic and international visitors and therefore generate substantial economic benefit for the businesses along the route and the wider area.

As part of the effort to attract more local, national and international visitors there is also significant investment being directed towards a project to promote the trail, worth almost £120,000. Marketing campaigns in Ireland and North America will be executed by Outdoor Recreation NI, an organisation with extensive experience in promoting walking trails to locals and tourists, towards the end of 2021.

This project is being part funded under Priority 6 (LEADER) of the Northern Ireland Rural Development Programme 2014-2020 by the Department of Agriculture, Environment and Rural Affairs and the European Union. The funding is administered by the Causeway Coast and Glens Local Action Group.